Santa Barbara Research Center
A Tribute and a Legacy

By Diane Sova with the SBRC Alumni

One man’s dream spawned a company that impacted the way we see our world even today. The roots of Santa Barbara Research Center were established when founder Dave Evans set up radio communications for the round-the-world flight of infamous Howard Hughes. Dave went to work for Hughes, became head of the Hughes Aircraft Electronics Department, then struck out on his own with an ambitious vision.

Gathering superior talent, Dave and five men pulled together to build something deemed impossible, a daylight star tracker for navigation. The journey was not easy, but their innovations produced instruments and results that were ultimately in high demand by United States defense forces and NASA’s space explorations.

The family of Santa Barbara Research Center bonded and thrived, supporting our country through several war efforts, the Space age, the Cold War, and beyond. For over fifty years, SBRC provided the technologies for star navigation, for soldiers to see at night, for astronomers to peer into deep space, and for tracking world-wide weather. Eventually, big business interests and a political train wreck led to the death of a dream and the disbursement of technical genius and talent that could never be recaptured. This is our story.

“This book tells how a small team of free-thinkers, with foresight and persistence, created a world technology leader… In 2020, it still retains its world leadership in infrared technology.” 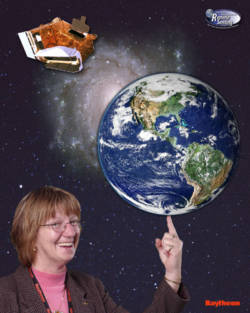 IN 1982, DIANE SOVA was hired by Eleanor Fox to work configuration management in George Bunson’s group. After investigation and confirmation, she was issued a Top Security clearance and spent a good portion of her career working on ‘dark’ programs, behind a wall of security. After a few stints, sometimes under contractor status, in the late 1990s she was released to work civil space programs. By the time Raytheon announced the closure of SBRS, Diane was the Manager of Civil Space Validation/Verification, reporting to Rob Wright at Raytheon in El Segundo.
In 2007, Diane left her beloved SBRC/SBRS to join Ball Aerospace in Boulder, Colorado. Diane’s academic studies spanned science and spirit. After earning her first degree in Business Administration, she changed course and went on with undergraduate mathematics, physics, and religious studies (more connected than you might think). She earned a BS in Systems Engineering, later earning BA degrees in Cultural Anthropology, then Comparative Religion. Later, Diane went on to earn her a Master’s degree in Space Operations, and a Master’s degree in Religious Studies. These seemingly polar opposites actually enabled her to readily bridge different cultures and beliefs. Throughout her career, Diane remained passionate about her friends and the family of Santa Barbara Research Center, later known as Santa Barbara Remote Sensing.